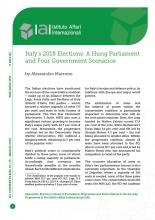 The Italian elections have sanctioned the success of the conservative coalition – made up of an alliance between the Lega, Forza Italia and Brothers of Italy (Fratelli d’Italia, FdI) parties – which secured a relative majority of votes (37 per cent) and seats in both houses of parliament. The Five Star Movement (Movimento 5 Stelle, M5S) also won a significant victory, growing to become Italy’s major party with 32.7 per cent of the vote. Meanwhile, the progressive coalition led by the Democratic Party (Partito Democratico, PD) suffered a stinging defeat, obtaining 22.7 per cent of the popular vote. Italy’s political scene is consequently divided in three poles, none of which holds a ruling majority in parliament. Accordingly, four scenarios are theoretically possible in the months ahead. Each holds different implications for Italy’s foreign and defence policy, its relations with Europe and major world powers.