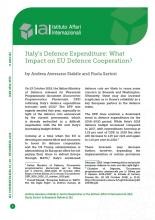 On 15 October 2018, the Italian Ministry of Defence released its Plurennial Programmatic document (Documento Programmatico Pluriennale, DPP) outlining Italy’s defence expenditure forecasts until 2020. The DPP was eagerly awaited this year, especially in light of the defence cuts announced by the current government, which is already embroiled in a difficult negotiation with the EU over Italy’s increasing budget deficit. Coming at a time when the EU is devoting increased effort and resources to boost its defence cooperation and the US Trump administration is admonishing its European allies for not paying their share to defend Europe through NATO, Italy’s envisioned defence cuts are likely to cause some concern in Brussels and Washington. Ultimately, these may also increase scepticism as to Rome’s reliability as a key European partner in the defence realm.