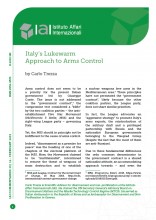 Arms control does not seem to be a priority for the present Italian government led by Giuseppe Conte. The issue is not addressed in the “government contract”, the compromise text considered a “bible” by the two coalition parties – the anti-establishment Five Star Movement (MoVimento 5 Stelle, M5S) and the right-wing League party – governing Italy. Yet, the M5S should in principle not be indifferent to the cause of arms control. Indeed, “disarmament as a premise for peace” was the heading of one of the chapters of the electoral platform of the M5S. Here, the Movement claimed to be “multilateralist”, intentioned to remove the threat of weapons of mass destruction and to establish a nuclear weapons free zone in the Mediterranean area. These principles have not permeated the “government contract”, likely because the other coalition partner, the League party, does not share similar priorities.