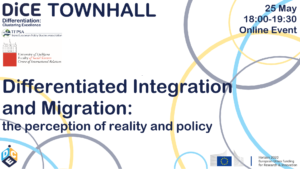 The DiCE – Differentiation: Clustering Excellence project organised a virtual townhall meeting on May 25 at 18:00-19:30 CET

On Tuesday, 25 May 2021, a virtual debate on the role and impact of different dynamics of the integration processes on the stability of the EU, commonly known as differentiated integration, was organised by CIR and TEPSA. At the event, named Townhall meeting, the issue of migration policy was selected as one of the most sensitive ones at the moment to illustrate the evolvement of EU policy in a particular area.

First, the concept of differentiated integration and the related questions for policy-making were introduced by Dr. Tekin. Ms. Kristovič enlightened the panel with the reality of migrant and refugees’ everyday life as seen from the perspective of a non-governmental organisation working in the field. The standpoint of the European Commission, especially within The New Pact on Migration and Asylum was presented by Dr. Shotter. He opened a discussion on the extent to which the Pact provides an adequate answer to the problems faced by the people who seek refuge in Europe. Here, Ms. Tušar shared with the panel the positions of the European Parliament’s parties towards the Pact, which show a significant level of differences among them. This part of the session was wrapped up by Mr. Videmšek, who summarised the EU policies in the migration area, suggesting that the EU has an insufficient potential in resolving this issue, especially in the light of numerous crisis areas the world is facing. His vast experience as a reporter covering war-torn areas that caused refugee crises and migration flows enriched this part of the discussion.

The debate was followed by questions from the audience (more than 80 participants attended the event). A poll on differentiated integration, the role of member states and the future of the EU has been organised as well. The results showed that despite criticism, the majority of the participants are still optimistic about the future of the EU: most of them believe that, notwithstanding the plethora of difficulties and challenges it faces, in twenty years from now, we will still live in the EU.

The discussion (in English) was moderated by prof. dr. Zlatko Šabič from CIR.

This Townhall Meeting was organised in the framework of the project ‘DiCE – Differentiation: clustering excellence’. Funded by the European Union’s Horizon 2020 research and innovation programme, DiCE establishes a large, open and inclusive research network designed to ensure that state-of-the-art research on differentiation is translated into policy advice made accessible to policy-makers at European, national and regional levels.