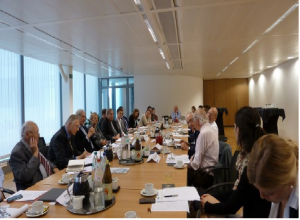 In cooperation with TEPSA and the the Institut für Europäische Politik (IEP) Berlin, and with the generous support of the Hanns Martin Schleyer Stiftung, the Coelner Monnet Association for EU Studies e.V. (COMOS) organised its annual conference on 20 – 21 June 2013 in Brussels, Belgium. Entitled „The European Council – The Many Faces of a Key Institution“, the conference convened an impressive line-up of EU experts, both from inside the political apparatus in Brussels as well as from academia, to discuss the European Council and its role in the EU’s development. The audience of around 40 participants in total moreover included junior researchers, students, professors and other ‘aficionados’ of EU politics and policies. The Permanent Representation of North Rhine Westphalia provided a perfect location for intensive and lively discussions.

The conference’s first panel was dedicated to the evolution of the European Council. Andrew Duff (Member of the European Parliament), Jean-Paul Jacqué (Secretary-General of TEPSA and former Head of the Legal Service of the Council) and Philippe de Schoutheete (a former Belgian diplomat), inter alia discussed the ambiguous role of the Commission President as a member of the meetings of the heads of state or government.

The second panel dealt with the European Council on the global stage. Gianni Bonvicini (Istituto Affair Internazionali Rome), Jim Cloos (Council of the EU) and Geoffrey Edwards (University of Cambridge) focused on the role of the European Council as crisis manager and on its president’s ability to represent the Union externally. The difficult position of the High Representative in the institutional framework was considered as well in the debate. 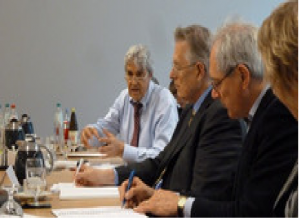 The third and final panel debated whether the European Council could be described as the EU’s “economic government”. Iain Begg (London School of Economics), Janis Emmanouilidis (European Policy Centre Brussels and author of summit analyses following each European Council) and Gabriel Glöckler (European Central Bank) dealt with various aspects of that question, from more structural considerations of how an economic government could be defined in the first place, to an assessment of the impact of the current crisis situation on the role of the European Council.

In their concluding remarks, Jean Paul Jacqué and Wolfgang Wessels (University of Cologne) broadened the perspective on the European Council by revisiting its position in the interinstitutional structure at EU level and by analyzing the long-term evolution of that institution between the heads of state or governments’ “problem-solving instinct” and their “sovereignty reflex”.

In the light of very positive feedback from participants, COMOS will organize another conference in mid-2014. Topic and location will be announced in early 2014. For more information on this year’s conference and COMOS in general, please click here.