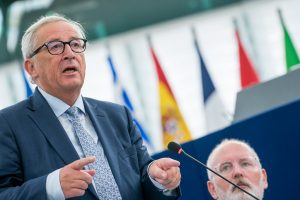 Jean-Claude Juncker gave on 12 September his last State of the Union speech before the European Parliament.

Many of his ideas were criticised by capitals as unrealistic, unhelpful, too costly and premature. In some comments Juncker’s suggestions were even experienced as an infringement of national sovereignty.

Most criticisms, however, are unfounded. To mention some examples:

Juncker is right when asking for a more common approach towards the Western Balkans. As history shows, enlargements have provided stability on our continent. If we do not act commonly, our immediate neighbourhood may get unstable and, as Juncker argued, may be shaped by others.

Juncker is also right when he calls for permanent structured cooperation in defence to become fully operational. In a world full of threats, and with an unpredictable American president, we have to show more responsibility to ensure the security of our citizens and countries.

Juncker correctly proposes a strengthening of the European Border and Coast Guard to better protect our external borders. The idea here is to recruit an additional 10.000 European border guards by 2020. Now, everybody knows that the massive influx of migrants in Europe in 2015 and 2016 could turn into a crisis because member states were not capable to handle the huge numbers of migrants: too few immigration officers were made available and an adequate infrastructure to receive the migrants was lacking. So, rather than the legislation developed at EU level it was the implementation by member states that was defective. And, it may be that the number of migrants coming to Europe has gone down over the last years and months. However, migration is a problem of all times. One way to solve this -common- problem is to invest more in European solutions.

Juncker for good reasons suggests a new Alliance for Sustainable Investments and Jobs between Europe and Africa. Stability and security in our neighbourhood is beneficial for us as well. However, our business people will not be tempted to spend their money in unstable African regions and countries. European-African supportive and incentive measures developed at the public level can pave the way for investments by private partners.

Furthermore, Juncker is right when arguing that the international role of the euro should be strengthened. As the second most used currency in the world, the euro can make the EU more visible as a relevant global player.

Juncker is also right when he insists on more progress in strengthening our foreign policy. The Commission’s proposal to move to more qualified majority voting in specific areas of our external relations is a good one. In fact, the treaty already allows us to do that: Article 48(7), first sub-paragraph, TEU. If adopted, such an approach can only make our common policy more efficient and more effective.

Juncker deserves support when stating that the Commission will resist all attacks on the rule of law. Violations of our fundamental values and principles are detrimental for the stability of our cooperation process. It is surprising that thus far only the Commission defends the rule of law against member states suspected to violate our values and principles. On the contrary, member states themselves are equally responsible and should become more active, for example in the light of the fact that all member states are member of the Council of Europe and party to the European Convention for the Protection of Human Rights and Fundamental Freedoms.

So, Juncker presented an impressive number of valuable ideas, perhaps difficult to grasp for national politicians having their short term interest in mind, but of the utmost relevance to ensure the sustainability of our EU cooperation on the long term.

Moreover, in line with the Commission’s suggestion to move to more qualified majority voting in the domain of the Union’s external action, the time has come to reflect about a reversal of the principles of EU decision making. Indeed, in view of the Commission’s mission as caretaker of the general interest of the Union, a wise step would be to further facilitate the procedure to have its proposals adopted: instead of, as the general rule is now, requiring a (positive) qualified majority in the Council to agree with a Commission proposal, we should consider a Commission proposal adopted unless disapproved by a (negative) qualified majority in the Council. Just an idea.

There is one point, though, where I disagree with Juncker: clock-changing. Leaving it to the member states to take final decisions about summer- or wintertime or both, is a recipe for chaos. Consumers and tourists will be confused and also for business such a flexible approach can have awkward consequences. It may even disturb the working of the internal market. Today we experience three time zones in the European Union. Let’s leave it like that. Or, alternatively, whatever solution may be agreed upon, let it be a uniform one.