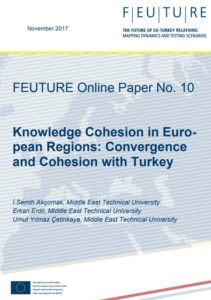 In a knowledge economy, it is interesting to see that the concept of knowledge cohesion is a fertile soil for research. Despite the ongoing interest in investigating whether economic cohesion has been achieved in Europe there is no work that looks at knowledge cohesion. Though it is difficult to investigate such an abstract concept one can look at a more concrete concept such as convergence. Using the European Union Framework Programme data from 1984 to 2016 we show that there are signs of knowledge convergence within the NUTS2 regions.

Despite the fact, the top performers persist over the years the convergence is much stronger among the less de-veloped regions. The results also show that Turkey enhanced its position in knowledge exchange considerably where some of its developed regions are emergent knowledge hubs. These results indicate that Turkish knowledge system is tied strongly to the European Research Area which reduces the probability of conflict scenario.