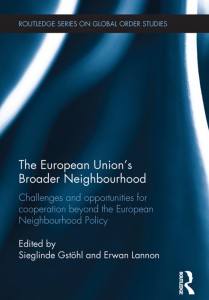 Over the past decade the European Union (EU) has gradually developed the European Neighbourhood Policy (ENP) with its neighbours. At the same time, the ‘neighbours of the EU’s neighbours’ have presented new challenges.

This book addresses the EU’s broader neighbourhood, comprising of the ENP countries and the neighbours of its neighbours. With specific focus on Saharan Africa, the Middle East and Central Asia, it discusses trans-regional policy issues that arise from the EU’s relations with regions beyond the ENP. Based on an interdisciplinary, policy-oriented approach, this volume explores major political, legal, security and socio-economic challenges and identifies opportunities for cooperation across the EU’s broader neighbourhood.

This book will be of interest to students, experts and scholars interested in EU affairs and politics, international relations, EU and international law, diplomacy and area studies.