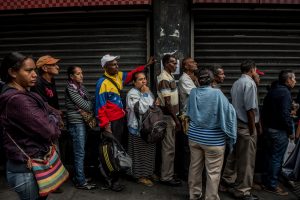 Venezuela is facing a deep economic, political, and social crisis, with acute shortages of food, medicine and other basic goods. Over 3.4 million Venezuelans, a tenth of the population, have left the country, presenting Latin America with an unprecedented migration crisis. However, diaspora engagement in humanitarian efforts could also be part of the solution to the crisis.

Latin America is experiencing one of the largest displacement crises in its history with Venezuelan migrants and refuges crossing into or transiting through neighbouring countries such as Colombia, Brazil, Ecuador and Peru, before reaching destinations further afield in the Southern Cone (Argentina and Chile), Central America and Mexico, and smaller island states in the Caribbean. During 2018 over 838,000 Venezuelans exited Colombia, of whom more than 70 percent crossed into Ecuador. In Europe, Spain has seen the largest influx of Venezuelans, with over 150,000 having entered the country over the past three years. The United Nations High Commissioner for Refugees (UNHCR) and the International Organization for Migration (IOM) estimate that the number of internationally displaced Venezuelans will reach 5,385,000 by the end of 2019, few of whom have any prospects returning in the short to medium term.