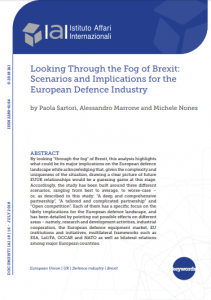 By looking “through the fog” of Brexit, this analysis highlights what could be its major implications on the European defence landscape while acknowledging that, given the complexity and uniqueness of the situation, drawing a clear picture of future EU­UK relationships would be a guessing game at this stage. Accordingly, the study has been built around three different scenarios, ranging from best to average, to worse-case – or, as described in this study: “A deep and comprehensive partnership”, “A tailored and complicated partnership” and “Open competition”.

Each of them has a specific focus on the likely implications for the European defence landscape, and has been detailed by pointing out possible effects on different areas – namely, research and development activities, industrial cooperation, the European defence equipment market, EU institutions and initiatives, multilateral frameworks such as ESA, LoI/FA, OCCAR and NATO as well as bilateral relations among major European countries.