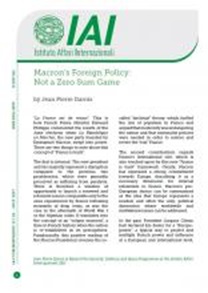 France has often been criticized for its nationalistic and at times unilateral approach to foreign policy. Since the “Arab Spring”, France has often pushed for regime change, which in turn has led some analysts to speak of a “neo-con” foreign policy. What we observe under Macron is an interesting mix of pragmatism (defence of French interests) and a methodology that is more compatible with Europe.

This EU/multilateral approach might resolve the classic French dilemma of a foreign policy suspended between pragmatism and idealism, between a realist-based approach and the classic French world-shaping vision that is deeply rooted in the will to export the ideals of the French revolution and human rights across the globe. These French policy tensions are melding with the EU’s multilateral approach, which can potentially help resolve the dilemma.

So, is France back? If “back” refers to the past, not really. Macron is breaking away from the past while not saying so. Macron is quickly stepping up in his new international role, revisiting all the processes and taking every opportunity to push his foot on the accelerator. This renewed approach opens up a range of possibilities and might define a new track for a France, a country that appears to have suddenly jumped into the 21st century. Ni plus, ni moins.

The article was writen by Jean Pierre Darnis, Head of the Security, Defence and Space Programme at the International Affairs Institute (IAI).

Click on the following link to read the full publication.