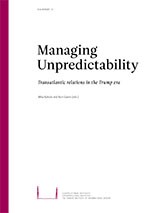 The initial stages of President Donald Trump’s administration are marked by an apparent shift in US foreign policy, including in its transatlantic relations. For many, the advent of the Trump era with its perceived inclination towards hard power, national self interest, protectionism and transactionalism necessitates a fundamental rethink of the US’s global role, its relations with Europe and, indeed, the rule-based international order. The aim in this report is to map out the main contours of the ongoing recalibration of transatlantic relations, with Nordic-Baltic security as the key frame of reference and case in point of the ongoing changes.

The report assesses how both internal and external threats to the liberal world order have resulted in a loss of faith in the foundations and institutions of the post-war system. It also explores the Trump administration’s rhetoric and action, and its impact on the European security order. The contributing chapters zoom in on the challenges, priorities and opportunities that arise in an evolving defence and security strategy in the Nordic-Baltic region, against the background of volatile US-Russia relations and a liberal world order in flux. A new paradigm for transatlantic defence and security relations may be arising, which will affect NATO as well as US-Europe bilateral relations. It is evident that transatlantic relations are going through a period of transition and uncertainty. Key challenges in the years to come will relate to managing this unpredictability, and “re-imagining” a transatlantic relationship that supports a reformed liberal order.