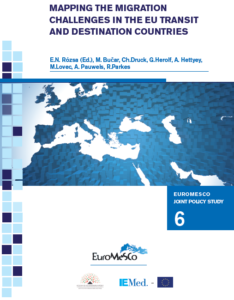 The European Institute of the Mediterranean published a Joint Policy Study ‘Mapping Migration Challenges in the EU Transit and Destination Countries’, to which Maja Bučar and Marko Lovec, members of the Centre of International Relations, contributed a piece on Croatia and Slovenia as transit countries.

The Joint Policy Study analyses the selected cases of some ‘destination countries’ (Germany and Sweden), several ‘transit route member states’ (Hungary, Slovenia and Croatia), and the atypical case of a country that was both a transit and destination country (Austria). The countries were selected on the basis of the experiences of the 2015 mass immigration, i.e. the most ‘popular’ destinations and the transits along the Western Balkan route, which has carried the greatest refugee flow to the European Union in 2015–2016.

This Joint Policy Study was written in the framework of the EuroMeSCo Working Package ‘Mapping Migration Challenges in the EU Transit and Destination Countries’, led by the Institute for Foreign Affairs and Trade.