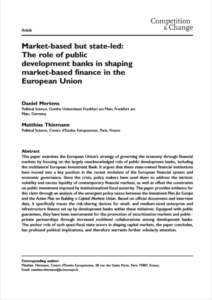 This paper examines the European Union’s strategy of governing the economy through financial markets by focusing on the largely unacknowledged role of public development banks, including the multilateral European Investment Bank. It argues that these state-owned financial institutions have moved into a key position in the recent evolution of the European financial system and economic governance. Since the crisis, policy makers have used them to address the intrinsic volatility and excess liquidity of contemporary financial markets, as well as offset the constraints on public investment imposed by institutionalized fiscal austerity. The paper provides evidence for this claim through an analysis of the emergent policy nexus between the Investment Plan for Europe and the Action Plan on Building a Capital Markets Union. Based on official documents and interview data, it specifically traces the risk-sharing devices for small- and medium-sized enterprise and infrastructure finance set up by development banks within these initiatives. Equipped with public guarantees, they have been instrumental for the promotion of securitization markets and public–private partnerships through increased multilevel collaborations among development banks. The anchor role of such quasi-fiscal state actors in shaping capital markets, the paper concludes, has profound political implications, and therefore warrants further scholarly attention.