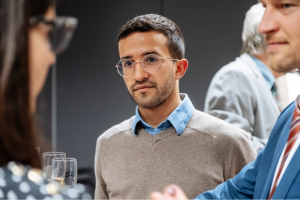 Xavier Ruiz Trullols is TEPSA’s Communications and Project Assistant. He manage TEPSA’s communication channels to increase the visibility of the organisation, including social media and website. He also assists in editing newsletters and publications as well as organising of conferences and seminars.

Xavi studied History and Political Science at the University of Barcelona and it holds an Advanced Master’s degree in International and European Studies from the Centre International de Formation Européenne. Before joining TEPSA he did an Advocacy and Communications traineeship at the Society of Audiovisual Authors (SAA). Previously, he did an internship at the Centre of Opinion Studies (Catalan Government) and at the Association of Political Scientist of Catalonia (COLPIS). He also contributes to Vocal Europe and analysed several times Spanish politics on Al Jazeera TV programmes. He is fluent in Catalan, Spanish and English and has a good command in Italian.