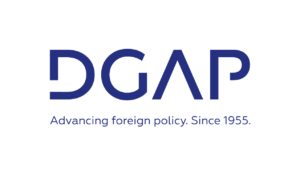 The German Council on Foreign Relations (DGAP) is committed to fostering impactful foreign and security policy on a German and European level that promotes democracy, peace, and the rule of law. Since its founding in 1955, the nonpartisan organization’s members and research have continued to shape the debate on foreign policy issues in Germany.

Through its work, DGAP aims to:

At DGAP, foreign policy is discussed by the decision-makers who shape it. Government officials from Germany and other countries, members of parliament and their staff, and ambassadors and diplomats regularly come together at DGAP’s events, more than 150 of which are held at its offices in Berlin-Tiergarten each year.

DGAP, a non-profit association, has more than 2,800 members who are committed to its goals. Those who are interested in foreign policy and under the age of 35 can join Young DGAP. Its more than 900 members value the unique opportunities for knowledge-sharing and networking that it provides. Seven regional forums actively facilitate debate on current foreign policy topics throughout Germany – from Hamburg to Munich, Düsseldorf to Dresden – and on to Brussels.

DGAP is Germany’s network for foreign policy. As an independent, nonpartisan, and nonprofit membership organization, think tank, and publisher, the DGAP has been promoting public debate on foreign policy in Germany for more than 60 years.