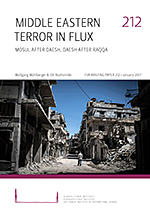 The US withdrawal from Iraq in 2011 coincided with the militarisation of the upheaval in Syria, preparing the ground for Daesh to emerge as a transnational jihadist militia.

Daesh’s cross-border territorial gains from 2014 continue to be reversed on multiple fronts in Iraq and Syria as major military campaigns are being waged in Mosul and Al-Bab, and are under preparation in Raqqa, the “capital” of the self-styled caliphate. Remarkably, Palmyra, the only place recaptured by the Syrian military itself, was retaken by Daesh in December 2016.

A huge number of actors, often with conflicting goals, are involved in the anti-Daesh offensives: the Iraqi armed forces, supporting militias and the Popular Mobilisation Units; Kurdish-dominated armed factions; the Turkish military, Russia, Iran and the multinational Operation ‘Inherent Resolve’ are all engaged in this fight.

As no terrorist movement can operate effectively without a broad range of supporters, Iraq’s political arrangements and the peace-building process in Syria will significantly determine the future Sunni stance over extremist ideas and organisations, particularly Salafi-jihadism.

Furthermore, two main issues emerge with regard to an assumed post-Daesh order: the reorientation of its fighters, including foreign fighters returning to Europe and the capability of inclusive governance to roll back sectarianism.