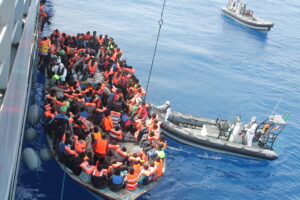 The EU must have an in-depth reflection on migration, including on legal migration. The reasons for this are simple. The overwhelming majority of arrivals in the EU are legal migrants. The official figure is 99.3%. Because we do not have exact figures on irregular migrants, the real figure is probably a bit lower, but not much. And Europe needs migrants for demographic reasons, as set out by Giles Merritt in our recent episode of EuropeChats on his latest book. Finally, as became very clear at the EU-Africa Summit on 17 and 18 February 2022, there must be a positive perspective for countries of origin if we want them to cooperate on fighting illegal migration. And if we want to put an end to people smugglers having a field day! Only a defensive and punitive approach will simply not work in view of the situation in many parts of Africa.

But a serious debate on legal migration will only be possible if the EU shows it is serious and efficient in its handling of illegal migration. This includes an efficient treatment of asylum applications to establish who is eligible and who is not. The more the EU will be able to show that it controls who enters the EU, the higher the public support for legal migration.

Ever since the crisis around the migrants’ quotas in 2015, the EU has been in deadlock on a major reform of its migration and asylum policy. The Commission’s proposal for a Pact on Migration and Asylum contains nine separate legislative proposals ranging from a solidarity mechanism on distribution to a change in asylum procedures. So far, the only agreement reached in June 2021 concerns the setting up of a new Asylum agency. All the other texts are blocked. Delegations in the Council even refuse to endorse texts where there is almost full agreement at the technical level out of fear to later lose out on some other parts of the Pact, particularly on relocation. This has come to be known as the “package approach”. This situation is untenable in the longer term: the EU must solve this if it wants to withstand the inevitable next major migration crisis, to save Schengen, and to develop an efficient legal migration policy.

The root of the impasse goes back to 2015. At a stormy dinner in April of that year, following a major tragedy of migrants drowning in the Mediterranean and against the background of the unfolding Syrian drama, the Heads discussed the escalating situation of migrants entering the EU without proper controls. After hours of talking, they concluded that the situation was serious, that solidarity was a duty, that it would be voluntary, but that all would participate. This was a promising start. But the Commission had other ideas: it wanted to solve the problem by introducing compulsory relocation of migrants via quotas. It made such a proposal and managed to push it through the Council in September under Luxembourg Presidency. Hungary, Romania, Czechia, and Slovakia voted against, but several other delegations also had misgivings.

It was the wrong answer at the wrong time and divided the EU hopelessly. Even though the ECJ declared it legal, it was never fully implemented. It meant starting from the end rather than the beginning: in a situation where you lose control of your external borders, the first thing to do is to regain that control, not to pretend to have solved the problem by shipping migrants across the continent. Mrs. Merkel’s remark about “Wir schaffen das” only further heightened resistance from Member countries fearing they would have to pay the bill for a policy of almost unfettered access to Europe by incoming migrants. It was the wrong solution because in the absence of internal border controls in the Schengen area there is no way you can prevent migrants from turning up in other countries than those they would be assigned to.

Now, at last, after countless fruitless attempts to find agreement, thwarted by people fighting the battle of 2015 all over again, there is at least a shimmer of hope. Migration has come back to the fore again, with the French Presidency giving it another try. And it might work. In the words of an insider and senior Council official, “the Interior Ministers are clearly tired of repeating the same old arguments time and time again, without moving ahead.” The recent informal meeting in Lille, graced by the visit of President Macron, seems to have gone well.

The French are proposing an alternative way to the package approach adopted hitherto. They suggest dividing the package into clusters based on a balance between solidarity and responsibility. In simple terms, responsibility refers to the need for countries of first arrival to register incoming migrants and to put them into the EURODAC (fingerprinting) data base. Solidarity means that other Member States are bound to help them to manage this process and to accept that the burden is somehow shared when it comes to either further processing asylum claims or organizing the return of those who do not qualify.

This pragmatic and gradual approach might work, but the devil is in the detail. There are many hurdles to be overcome. How do we cater for the differences between maritime and green borders? What do we do after screening has occurred with the migrants who are not eligible for asylum? Where will they be detained and how will they be returned? Can physical barriers be licit in certain situations to avoid refoulement and even financed by EU funds (something that could be legally possible, but the Commission adamantly refuses for the time being). How exactly should we define solidarity? Relocation will only work if it is voluntary. Are there alternative means to show solidarity? Could one use the principle of legal fiction of non-entry to alleviate the burden on countries of first arrivals; this means that in some cases, Member States would not be forced to accept the presence of persons having irregularly entered their territory unless or until they authorize them to do so, allowing them to use simplified rules for immediate returns. What about secondary movements, which can be seen as a kind of solidarity borne by Germany and others? Will there be agreement on suspension measures concerning the processing of asylum claims requested by counties and Lithuania confronted to the Belarus chantage with migrants? Others have resisted this move because they fear it would durably weaken the asylum procedures. The negotiation will stretch far into the next Presidencies and can only succeed with the agreement and active involvement of the European Parliament which is an equal partner in the codecision procedure. It can be done. The work conducted over the last 6 years means that the technical preparations are well advanced. Now it is a matter of political will.

The second major theme in Lille revolved around Schengen. The Presidency proposed to create a Schengen Council, inspired by the Eurogroup, to provide political guidance and more regular interaction among Ministers. It would comprise the 27 plus the four associate countries, as is the case currently in the Schengen Mixed Committee. It is more a messaging device to increase the ownership of the Ministers and systematize the Council’s work. Presently, the Schengen evaluation system, which looks at the conditions that are necessary to maintain the absence of internal border controls, is a bureaucratic approach happening at the technical level. It is a working group that discusses and adopts evaluations. Without political ownership they are quickly forgotten. This must change. And Ministers should instruct their services to use the existing data bases in a far more systematic fashion.

One more surprising proposal made by the French Presidency concerns the setting up of an “Intergovernmental Rapid Reaction Force.” It is not yet clear what exactly this is meant to achieve nor what the size should be. FRONTEX already has a Reserve for rapid Reaction which it can mobilize on request of a Member State in an emergency, to help with border management and returns. The French may have made their proposal because presently some Member States are not keen on FRONTEX assistance for reasons of sovereignty and a lack of trust. This will have to be clarified in the coming weeks.

The EU needs a comprehensive policy, combining control of illegal migration, preservation of a humane asylum system, and a functioning legal migration policy. The latest developments are encouraging; now is the time to break the deadlock and move to a new stage in our migration and asylum policy.