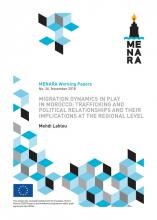 In 2018, Morocco became the first country of departure for migrants from Africa, as Spain became, simultaneously, the most important gateway to Europe during the same year. For Spain, this development revived fears generated by the events of autumn 2005, when hundreds of migrants breached, for the first time, the security fences between its cities in the North of Africa (Ceuta and Melilla) and the rest of Morocco. It also recalled the arrival of 32,000 migrants, primarily from Mauritania and Senegal, in the Canary Islands from May to September 2006. In that sense, the history of irregular migration between Africa and Europe seems to have been repeated since the beginning of the current century. Thus, the recent migration trends in the western Mediterranean indicate that, even if Morocco does everything it can and collaborates fully with European migration policy, as is the case today, these actions will not reduce irregular migration to the northern shores of the Mediterranean – and stop all the trafficking it induces – unless a new approach to security, economic and social conditions is adopted in the countries of departure.(…)