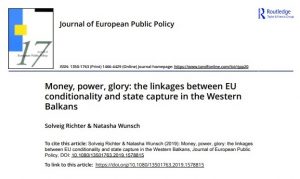 The Western Balkan countries are stuck in a hybrid status quo on their way to democracy. Traditional arguments related to cost–benefit calculations, national identity or conflicting objectives fail to explain the observed decoupling between gradual improvements in formal compliance with membership criteria and stagnating, if not declining, democratic performance. We explain the limited impact of the EU’s political conditionality in the Western Balkans with rampant state capture and proceed to unpack how EU conditionality has effectively contributed to the consolidation of such detrimental governance patterns. First, EU pressure for simultaneous economic and political reforms opened opportunities for business actors to build powerful clientelist networks that reach into politics. Second, top-down conditionality has weakened political competition and mechanisms of internal accountability and deliberation. Finally, formal progress towards membership and high-level interactions with EU and member state officials legitimize corrupt elites. A congruence analysis of the Serbian case provides empirical evidence for the hypothesised linkages between EU conditionality and state capture.