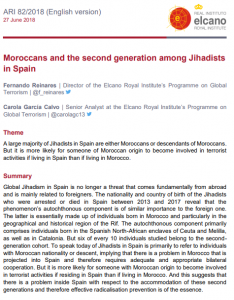 A large majority of Jihadists in Spain are either Moroccans or descendants of Moroccans. But it is more likely for someone of Moroccan origin to become involved in terrorist activities if living in Spain than if living in Morocco.

Global Jihadism in Spain is no longer a threat that comes fundamentally from abroad and is mainly related to foreigners. The nationality and country of birth of the Jihadists who were arrested or died in Spain between 2013 and 2017 reveal that the phenomenon’s autochthonous component is of similar importance to the foreign one.

The latter is essentially made up of individuals born in Morocco and particularly in the geographical and historical region of the Rif. The autochthonous component primarily comprises individuals born in the Spanish North-African enclaves of Ceuta and Melilla, as well as in Catalonia. But six of every 10 individuals studied belong to the second-generation cohort. To speak today of Jihadists in Spain is primarily to refer to individuals with Moroccan nationality or descent, implying that there is a problem in Morocco that is projected into Spain and therefore requires adequate and appropriate bilateral cooperation.

But it is more likely for someone with Moroccan origin to become involved in terrorist activities if residing in Spain than if living in Morocco. And this suggests that there is a problem inside Spain with respect to the accommodation of these second generations and therefore effective radicalisation prevention is of the essence.