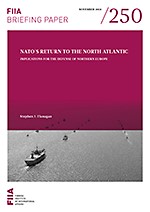 Stephen J. Flanagan, NATO’s Return to the North Atlantic: Implications for the Defense of Northern Europe, 11 2018

In a period of renewed great power competition, the United States and other NATO allies are once again giving attention to the maritime dimension of deterrence and defense in the North Atlantic and Northern Europe.

Growing Russian assertiveness and the deployment of a range of new maritime surface and subsurface systems have increased the threat to maritime lines of communication across the Atlantic, which are a central area of NATO’s responsibility and essential for North American reinforcement of forces deployed in Europe in the event of a major crisis.

The US and NATO responses include an increased naval operational tempo, expanded maritime exercises, the pre-positioning of additional equipment, and the re-establishment of the US 2nd Fleet and the NATO Joint Forces Command, Norfolk, both with missions to defend the North Atlantic.

These developments need to be further integrated into NATO and national plans for defense of Northern Europe and the Arctic, and tested through exercises and training. There may be opportunities to improve this integration in the context of Nordic/Baltic cooperation and the bilateral and trilateral defense cooperation that Finland and Sweden are pursuing with the United States.