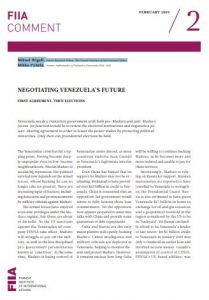 Venezuela needs a transition government with both pro-Maduro and anti-Maduro forces. Its function would be to renew the electoral institutions and negotiate a power-sharing agreement in order to lower the power stakes by protecting political minorities. Only then can presidential elections be held.

The Venezuelan crisis has hit a tipping point. Having become deeply unpopular even in low-income neighbourhoods, Nicolás Maduro is escalating repression. His political survival now depends on the armed forces, whose backing he can no
longer take for granted. There are increasing signs of fracture, including defections and pronouncements by military officials against Maduro.