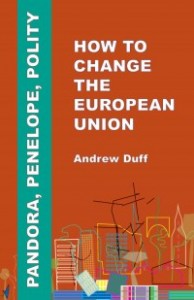 Pandora, Penelope, Polity: How to Change the European Union

In Pandora, Penelope, Polity: How to Change the European Union, leading constitutional specialist and federalist Andrew Duff lays down a detailed blueprint for reform of the EU’s constitution, to give Europe a proper government that can meet the urgent challenges it faces as a continent.

The European Union enters 2015 amid profound uncertainty as to its future direction. The main task of a new round of treaty amendment will be to create the constitutional framework for fiscal and eventual political union, while somehow also dealing with the British demand for renegotiation of its terms of membership. Many of Europe’s leaders fear opening the ‘Pandora’s box’ of further constitutional change − but the box is already open, and the bigger risk lies in failing to take action.