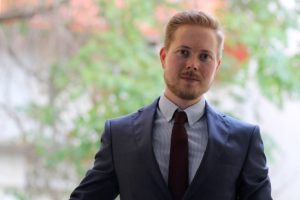 In March (4th-22nd), the IIR hosts Christofer Berglund, Assistant Professor at the Department of Global Political Studies, Malmö University, where he is affiliated with the Platform for Russia and the Caucasus Regional Research (RUCARR).

Christofer Berglund earned his PhD in Political Science from Uppsala University, and specializes in language politics, ethnic conflicts, competitive authoritarianism, and strategic studies in post-Soviet Eurasia. His research has been published in Nations and Nationalism, Nationalities Papers, Caucasus Survey, Journal of Language and Social Psychology, Demokratizatsiya, as well as in Foreign Policy and in several other outlets. He has earlier worked with the Swedish Defence Research Agency (FOI) in Stockholm and the Institute for Russian and Eurasian Studies (IRES) in Uppsala.

Christofer has been a visiting researcher at The George Washington University, the Norwegian Institute of International Affairs (NUPI), and at think-tanks and universities in the Caucasus and in the Baltics.