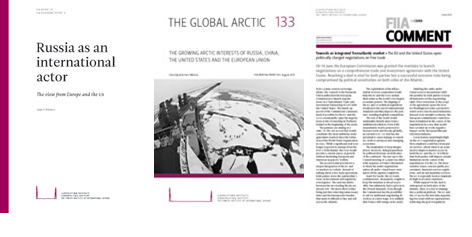 Sean P. Roberts,  Russia as an international actor: The view from Europe and the US

The hard-line approach taken by the Russian authorities following the December 2011 parliamentary election has led to growing consternation within the international community, while the return of Vladimir Putin to the post of President of the Russian Federation in May 2012 has generated largely negative evaluations of Russia’s political trajectory. But how is the Russian Federation viewed in a broader context as an actor within the international system? Does Russia play a positive or negative role on the international stage and is Russia viewed as a strategic partner or a strategic competitor by other actors, including the European Union and the United States? The material presented in this report is a symbiosis of opinions and analysis from European and US researchers and practitioners dealing with these questions, following roundtable discussions held in Finland in January 2013 and in the US in April 2013. The report highlights the main issues raised during the course of these discussions.

With exciting economic opportunities and serious environmental challenges, the Arctic is transforming and re-emerging as a geopolitically important region. Major global players within and without the Arctic are paying greater attention to the region. While Russia is a traditional Arctic state with significant economic and security interests in the region, China, the US and the EU have also expressed their Arctic interests more explicitly. They are keen to tap into the economic potential and have a say in the way the region becomes accessed, exploited and governed. As a result, the Arctic is no longer a spatially or administratively confined region, but is instead taking its new form in the midst of contemporary global politics. The globalization and economization of the Arctic will most likely downplay environmentalism and reduce the relative influence of the indigenous people and small Arctic states in Arctic affairs. Arctic governance is also likely to turn more complex and complicated as the economic and political stakes are raised.

Johanna Jacobsson, Towards an integrated Transatlantic market: The EU and the United States open ­politically charged negotiations on free trade

On 14 June the European Commission was granted the mandate to launch negotiations on a comprehensive trade and investment agreement with the United States. Reaching a deal is vital for both parties but a successful outcome risks being compromised by political sensitivities on both sides of the Atlantic.