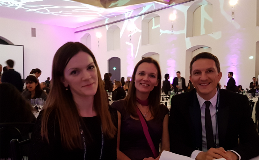 Andreja Jaklič, Anže Burger, Marjan Svetličič and Iris Koleša from the Centre of International Relations (CIR), Faculty of Social Sciences, University of Ljubljana, presented CIR’s latest findings in international business (IB) at the EIBA 2016 conference on ‘Liabilities of Foreignness vs. the Value of Diversity: Conflict or Complement’.

The event that was organised by the European International Business Academy (EIBA) took place between 2 and 4 December 2016 and attracted 650 academics and researchers from all over the World to Vienna, Austria.

As part of the conference, elections of new EIBA board members also took place. Andreja Jaklič completed her 6-year term as a National Representative for Slovenia, during which she contributed to the increase of EIBA membership – especially by members from Central and Eastern Europe (CEE) (Hungary, Czech Republic and Russia); and collaborated in designing a newly launched format of academic cooperation in Europe though the EIBA-workshops. The first EIBA workshop that gathered IB scholars from the CEE region was organised on 12 October 2016 at the Corvinus University Budapest.

At the 2016 EIBA elections Anže Burger from CIR was elected as the new National Representative for Slovenia. His term will start in 2017, when the next EIBA conference will also be organised (the latter will take place in Milan, Italy, between 13 and 16 December).

Between 29 September and 1 October 2016, Andreja Jaklič from the Centre of International Relations took part at the 3rd Academy of International Business Central and Eastern Europe Chapter (AIB-CEE) Annual Conference in Prague. She participated in several debates on the developments in international business in the CEE region and presented a study on interorganizational network management for successful business internationalization, prepared together with Iris Koleša – also a Centre of International Relations member. The authors were awarded an acknowledgement for an outstanding paper by the conference organisers for the mentioned study. At the event, 44 papers were presented, among which ‘Slack, innovation and export intensity: Implications for SME’ by Patricia McDougall-Covin, Andrea Kiss, and Stephanie Fernhaber received the Best Conference Paper Award.

The conference entitled ‘Boosting competitiveness of Central Europe through digital economy’ was organized at the University of Economics in Prague, Czech Republic, and attracted over 80 academics to attend the panel discussions and sessions, which focused on issues such as new forms of businesses, role of digital economy in Central and Eastern Europe, digital entrepreneurship and possible impacts of digital economy on competitiveness and economic growth in Central and Eastern Europe, as well as on other key aspects of current trends in international business in the region.

Advantages and Challenges for the National Innovation System in Building a Competitive Industrial Strategy; Faculty of Social Sciences, University of Ljubljana

On 15 November 2016, the Faculty of Social Sciences, University of Ljubljana, hosted a Directorate-General for Neighbourhood and Enlargement Negotiations (DG NEAR) sponsored event on Europeanization of Western Balkans (WB). Nearly 30 participants, predominantly MA and BA students of European Studies and International Relations, but also interested policy makers, representatives of the national Chamber of Commerce and civil society representatives working in the field of innovation and industrial policy, cooperated in a 3,5-hour round table with a dynamic Q&A session.

Efka Heder, MA, Director, South East European Centre for Entrepreneurial Learning, gave the opening presentation and highlighted the potential and existing good practices in promoting entrepreneurial learning in the region of Western Balkans. Dr Peter Wostner, Government Office for Development and European Cohesion Policy, revealed recent development in industrial policy and implementation of smart specialisation in Slovenia. Dr Maja Bučar, Professor and Head of the Centre of International Relations, University of Ljubljana, illustrated the importance of the National Innovation System, reviewed recent developments in Europe and Slovenia and analysed the Slovenian experience in comparison with the Western Balkans’ experience.

The round table and debate was moderated by Professor Dr Andreja Jaklič.