The European Institute in Lodz has currently undertaken to develop a programme of co-operation with countries covered by Eastern Partnership and Russia. The European Commission Project (DG REGIO): EU-European Neighbourhood – Russia: Cross-border Co-operation in the Framework of Regional Policy, has just entered its implementation phase.

On February 2, 2013 the European Institute hosted a high-level delegation of the Republic of Azerbaijan. The delegation, headed by Elkhan Suleymanov, MP, Chairman of the Azerbaijani Delegation to the Euronest PA, included – among others – two Ministers (for Education and for Energy and Industry), 8 members of Azerbaijani Parliament and 3 Rectors of Universities. The programme embraced: mutual partners’ presentations, round table debate on future axes of co-operation and the official signature of Memorandum of Understanding, providing for areas and forms of further joint actions. The visit took place upon invitation of Jacek Saryusz-Wolski, MEP, Vice-President of Euronest Parliamentary Assembly and President of the European Institute’s Council. 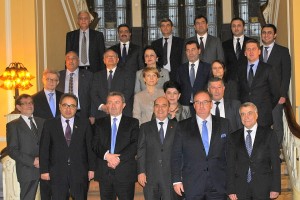