Director Tiilikainen has been appointed to an eminent panel. FIIA’s Center for US Politics and Power will organise its 2nd Summer Session in September. Meanwhile, FIIA has taken on projects on German foreign policy and Euro-Mediterranean Partnership.

Teija Tiilikainen appointed to an OSCE panel on European security.

Director Teija Tiilikainen takes part in the OSCE Panel of Eminent Persons on European Security as a Common Project. The Panel is chaired by Ambassador Wolfgang Ischinger and it consists of 15 distinguished individuals. The Panel provides advice on how to reconsolidate European security.

The Center for US Politics and Power (CUSPP) at FIIA will organise its second Summer Session in Helsinki on 9-12 September 2015. The programme includes keynote presentations and thematic workshops.

CUSPP welcomes paper proposals for new and innovative approaches on understanding the transformations of the US role and power in global setting. These views can include domestic power developments and external issues such as regional rebalancing and alliance formations. The Call for papers is available on the Institute’s website (deadline May 26).

The European Institute of the Mediterranean (IEMed), jointly with FIIA and 12 other research institutes from the EU and the Mediterranean Partner Countries have recently begun the implementation of the 4-year project, co-funded by the European Commission and the IEMed.

The main objective of the project is to reinforce dialogue, political research and studies on the key issues and trends of the Euro-Mediterranean Partnership and to ensure their dissemination to civil society and policy-makers. The project is coordinated at FIIA by Wolfgang Mühlberger.

FIIA has established a research group which aims to assess whether the events of recent years constitute a new chapter of Germany’s role in EU foreign policy. The group will organise a workshop on 4 and 5 June in Helsinki, a panel at the UACES conference in Bilbao on 7-9 September and, finally, produce a report on the topic in early 2016. The project is coordinated at FIIA by Niklas Helwig.

National perspectives on the EU

Research Fellow Tuomas Iso-Markku represents FIIA in the project “Bridging National Perspectives on the European Union”. The project is led by Ifri (Institut français des relations internationales, Paris) and involves representatives from all EU member states. The project includes events and short publications on the topic. It will be carried out during 2015-2016.

EU Programme Director Juha Jokela returned from his 3-month visit to the European Union Institute for Security Studies (EUISS) in Paris in the beginning of April.

In April, Dr. Christian Fjäder joined FIIA to work on a research project on international interdependencies and Finland’s security of supply. The project is partly funded by the National Emergency Supply Agency where Fjäder works as a Director of the secretariat of emergency supply organisation.

Programme Director Arkady Moshes served as an expert at public hearing on the EU-Russia relations at the Committee on Foreign Affairs of the European Parliament on Feb 24.

The Finnish Journal of Foreign Affairs

The Journal has been awarded for the best layout of 2014 in the Edit Magazine Awards organised by the Finnish Periodical Publishers’ Association. In addition, the lead story of the issue 4/2014 was selected as the best story in the category of trade and organisational magazines.

Issue 1/2015, published in early March, focuses on European defence. The issue also explores the roots of the Russian understanding of democracy and takes a look at how nationalism has become almost an official ideology of the Russian state.

The journal is available both as a printed journal and as an e-paper at Lehtiluukku.fi. 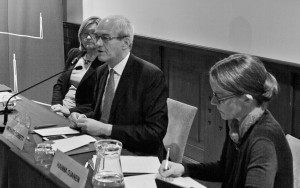 Director Brigid Laffan, MEP Richard Corbett and Professor Hanna Ojanen discussed “The Future of the Political Union of the EU” in a FIIA seminar on 4 February (audio recording available on the Institute website). http://www.fiia.fi/en/event/727/the_future_of_the_political_union_in_the_eu/