The project “TruLies – The Truth about Lies on Europe” of the Institute for European Politics (IEP), in cooperation with Das Progressive Zentrum (DPZ) and supported by the Stiftung Mercator, presents its first results. Six fact sheets on the topic of ‘migration and asylum’ analyse Eurosceptic and populist statements and subject them to a fact check.

In a joint statement with other societal organisations and individuals, the Institute for European Politics calls on European institutions, the federal government and the Bundestag in support of the Central European University (CEU) in Budapest. On Tuesday, the Hungarian parliament decided on amendments that threaten the continued operation and existence of the CEU. Read the complete wording of the statement on our website.

Continuation of collaborative project with Danish Institute for International Studies

The collaboration between the Danish Institute for International Studies (DIIS) and the Institute for European Politics (IEP) will continue in 2017. Launched in 2015 with a project on Danish-German military cooperation, the most recent project in 2016 concentrated on the effects of the refugee crisis on Denmark and the German government’s EU-policy agenda as well as its political leeway. This year, security debates in the run-up to the German national elections will be the main focus of the collaboration.

The new IEP Dossiers offer current scientific texts on German European Policy, Brexit and populism in Europe, the migration crisis and migration, on European Neighbourhood Policy with a focus on the Ukraine, European foreign, security and defence policy, economic, monetary and trade policy of the EU, and basics of the EU. 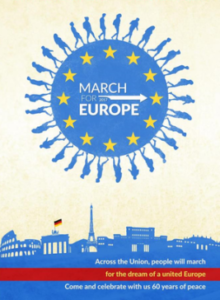 #MarchForEurope – Pointing out the Way in Berlin and Rome on March 25th, 2017

As a scientific partner of the Europa-Union Deutschland, the IEP stood behind the March For Europe on 25 March 2017 to support a unified, free, open and social Europe, a Europe of human rights, freedom of expression and the press, the rule of law, understanding and solidarity, a Europe of citizens with opportunities for a democratic and participatory role in shaping the future, and against the return of nationalism, isolationism and confrontation!