The report will focus on four key areas:
1. Economic and monetary affairs & free movement of capital
2. Fisheries, right of establishment and freedom to provide services
3. Agriculture and rural development & food safety, veterinary and phytosanitary policy
4. The status and future of the EEA agreement, including discussions on the developments taking place within the European Union since the accession negotiations with Iceland began in 2009

The EU-Iceland accession negotiations began in 2009 but were formally “put on hold” after the change in government in the spring of 2013. The new coalition government of the Progressive Party and Independence Party decided that no decision on the continuation of the accession negotiation would be taken before the Ministry for Foreign Affairs in Iceland had written a report on the status and future of the EU. After having been denied participation in that work, the Icelandic Confederation of Labour, the Icelandic Federation of Trade, the Confederation of Icelandic Employers and the Icelandic Chamber of Commerce decided to commission a similar report.

When asked how the work is going, Pia Hansson, Director of the Institute of International Affairs said: “The work is progressing well. Our experts have already conducted numerous interviews with key stakeholders and participants in the accession negotiations.” She added that the experts will be going to Brussels to conduct interviews with key officials and experts who are well acquainted with the EU-Iceland accession negotiations.

The work began in November and the report will be submitted to the contractors in April 2014.

In 2013 the Institute of International Affairs received a grant from the Icelandic Centre for Research (RANNIS) for the development and publication of a textbook in European Studies for high school students in Iceland. The book is the first of its kind in Iceland and will redress the shortage of teaching material in Icelandic on European integration. The book will focus on European integration and explain how the European Union works, its policies and also its relevance for the development of European societies in the 20th century. Furthermore, it will give special attention to Iceland’s relations with the EU as an EEA and Schengen member, and also as a small state in Europe. Whether Iceland joins the EU or not the country is, and continues to be, highly integrated into the European project. Consequently, it is important to promote knowledge of the European integration process – its history, structure and premises – in order to enhance knowledge and understanding of this important partner of Iceland.

The IIA has hired six academics and specialists to write the ten chapters in the book and their work is already well underway. The chapters will cover a whole range of issues related to the EU; decision-making, policy areas, relations between Iceland and the EU, and small states in the EU. The bulk of the writing should be completed in March and in early summer we foresee to be able to present the book to high-school teachers with the aim of it being used for the first time in the autumn semester of 2014. Subsequently the aim is that the book will be updated regularly and used for many years to come.

A visit to Washington DC and Alaska 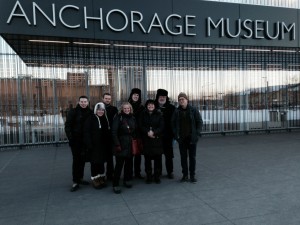 The staff of the Institute of International Affairs, Centre for Arctic Policy and colleagues from other universities in Iceland visited Washington DC and Alaska in December 2013. The purpose of the trip was to meet people working on Arctic issues, explore possibilities of cooperation and identify potential speakers to invite to Iceland. The group visited key institutions and think tanks working in this field, including: The Atlantic Council, Centre for Strategic and International Studies, Senator Lisa Murkowski‘s office, the US State Department, Institute of the North and the University of Alaska in Anchorage and Fairbanks, Alaska. Several collaborative research projects are being developed following the trip.