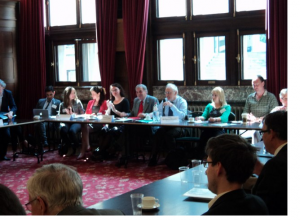 The third LISBOAN conference, co-organised by TEPSA and the University of Cologne, took place on June 6th-7th, 2013. The concluding event of the LISBOAN network convened over 50 participants from a large number of partner institutions at the Fondation Universitaire in Brussels. The aim of the conference was to take stock of past activities, discuss present developments in the EU and formulate a research agenda for the future of European integration studies in general and the Lisbon Treaty in particular. Member of European Parliament Jo Leinen delivered a keynote speech on the topic. The outcomes of past events held under the auspices of LISBOAN and the three issues of the Lisbon Watch annual report also formed a starting point for discussions. Moreover, revisiting the debates in the framework of the seven Working Groups, Workpackage Leaders participated in a roundtable which retraced developments in the various thematic areas. Reports from the individual parts of the conference can be downloaded here.

Conference results will also feed into a short working paper on the overall results of three years of LISBOAN, drawn up by the Coordinator in cooperation with the Steering Committee.

Before LISBOAN came to a close on 30 September 2013, two more events were organised: