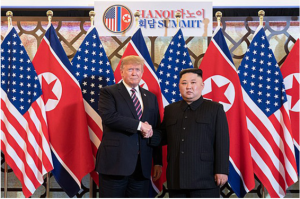 Ramón Pacheco Pardo, North Korea and the US: no deal towards a workable and sustainable deal?, March 2019.

The Hanoi summit between the US President, Donald Trump, and the North-Korean leader Kim Jong-un ended without an agreement. This does not necessarily spell the end of the current diplomatic process involving North Korea, though. In fact, real negotiations between Washington and Pyongyang had only started a few weeks before the Hanoi summit. And the summit has served to have a clear understanding of Pyongyang’s starting position for negotiations. It should thus be possible to launch a real diplomatic process that leads to a workable deal that satisfies both parties. Ideally, South Korea will take a mediating role throughout the negotiation process. The deal will likely involve an incremental approach that helps to build trust, rather than a grand bargain. To make implementation of the deal sustainable over the years it would be necessary to involve other parties. These would include, above all, South Korea and China, but also Russia, Japan and potentially more actors.