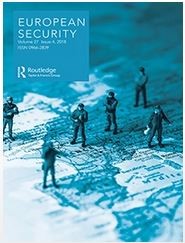 This contribution increases the understanding of the EU’s role in post-conflict settings by exploring perceptions of EULEX by local rule of law experts. Drawing on critical peacebuilding and the decline of normative power Europe literatures, we develop an analytical framework, underlining the importance of the intention–implementation gap and the implementation–perception gap in understanding how EU missions are perceived. By comparing local expert narratives to those of EULEX judges, prosecutors, and legal officers, we contend that the core problem for the negative perception of the mission results from what we call the double proximity paradox in peacebuilding. The first paradox is one of implementation and transpires when an actor commits substantial resources to address structural problems in a post-conflict territory due to its centrality for its own interests, but fails to uphold its commitment as its immediate interests can only be achieved through agents who contribute to these problems. The second paradox relates to perception and transpires as high commitments raise expectations of structural impact. The visibility of the actor’s investment makes any implementation failures more tangible. The actor is therefore, paradoxically, the most open to criticism in a territory where it is doing the most.