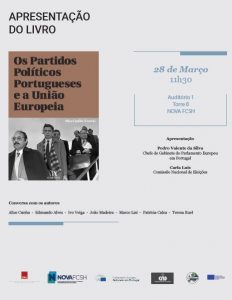 The event “Portuguese political parties and the European Union: Turnout and Euroscepticism in the framework of the European elections” was held in 28 March 2019, on the premises of NOVA FCSH in Lisboa, in partnership with the European Parliament Office in Portugal, the National Electionsʼ Commission, the Trans European Policy Studies Associations (TEPSA) and the Europe for Citizens Programme.

Overall, this event presented the results of a research project in Portugal about the evolution of national political parties. It reached out to a non-expert audience, with the aim of a better understanding of the political parties’ positioning towards the European Union, with a particular focus on the elections in May 2019. The scholars presented their work and engaged with an audience of more than 80 students (mainly of Political Science and International Relations) to discuss political participation/turnout, Euroscepticism and other key issues expected to shape the electoral outcome.

The event was open to everyone and, besides the students, some researchers and academic experts also attended the event, which was much participated. Their feedback is very positive and clearly those who have attended the event gained a deeper understanding and knowledge on European Parliament elections, political participation and the challenges ahead.