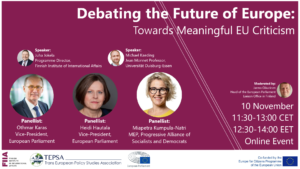 The debate on the future of Europe has gained a new momentum due to the Covid-19 pandemic and related recovery measures adopted by the EU. Against this backdrop, the importance of the Conference on the Future of Europe has been highlighted as a platform for much needed public discussion concerning the direction of the EU. On 10 November at 11:30 CET, TEPSA along with the Finnish Institute of International Affairs (FIIA) and the European Parliament hosted a webinar discussing these topics.

While the support for the EU has remained relatively high among citizens, the recent recovery decisions have also empowered Eurosceptic and populist parties. Consequently, the debate has been often reduced to the simple choice of for or against the EU. What are the current political trends in debating the future of the EU? How to move beyond the populist framing of the EU affairs?

Juha Jokela and Michael Kaeding started the event by introducing some keynotes of their contributions on the monograph Euroscepticism and the Future of Europe: Views from the Capitals.

Kaeding highlighted the differences of Euroscepticism in Europe between and within member states. For example, in the Netherlands there are five Eurosceptic parties in the parliament with diverse claims from both, the left and the right, sides of the political spectrum. On the other hand, in some member states, such as Lithuania, there are no Eurosceptic parties represented in the parliament. In addition, Kaeding noted that Euroscepticism has been an inherited part of the European Integration process and it is constantly in flux.

Jokela focused in his introductory speech on Finland. His key message was that moving beyond populistic Euroscepticism would require more debate on the EU and clearer positions from political parties on concrete EU issues. Jokela pointed out that in Finland there is a paradox between growing citizens’ support towards the EU and good election results of the openly populist Eurosceptic Finns Party. In addition, Jokela emphasized the importance of the security benefits of the EU membership for Finland. Finally, he noted that the EU’s recovery package has led to intensified populist anti-EU rhetoric in Finland.

Vice-President Othmar Karas highlighted in his commentary that the main problem is not the support of Eurosceptic parties in the European Parliament, but the lack of constructive public discussions on EU-issues. According to Karas, the benefits of EU-membership are not articulated well enough publicly. Instead of seeking common European solutions and compromises, national interests are too often pitted against EU’s interests. Finally, Karas stated that the core concerns of the citizens can only be solved on a European level.

Vice-President Heidi Hautala emphasized the need for meaningful and constructive EU criticism which is according to her vital in developing the EU towards its full potential. Hautala also criticized member states’ national leaders of blaming Brussels for difficult political decisions. In addition, she agreed with Karas on the need for European solutions for key concerns, such as climate change and growing inequalities. Finally, Hautala praised the Ursula von der Leyen’s Commission for its efforts to push forward the European Green Deal.

MEP Miapetra Kumpula-Natri also agreed with Hautala and Karas on the need for European solutions and compromises. She highlighted the difficulties to defend compromises made in the European Parliament against populist critique. In addition, she called for a stronger EU that could use its economic leverage more actively in promoting important topics, such as climate change, social justice and privacy. According to Kumpula-Natri the EU could for example take a harder stance on big tech companies and set stricter norms for car sellers.