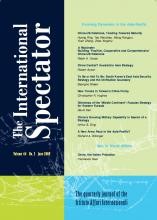 Following the rise of the Islamic State in 2014, the Atlantic Alliance engaged in an ambitious political revision of its policies towards the Middle East, which led to the creation of the NATO Strategic Direction South Hub. However, this new policy was only marginally the product of a threat-driven strategy; rather it was the result of two factors. Specifically, it responded to a political need in NATO Headquarters and the capitals of member states, particularly in Southern Europe countries, to acknowledge the latest security challenges in the Middle East and to offer a policy more balanced between NATO missions to the East, namely vis-à-vis Russia’s policies in its neighbourhood, and those in the South. The Hub also provided the Joint Forces Command – Naples with a strong mission within the NATO bureaucracy. Nevertheless, the limitations of the project with respect to the Alliance’s other political priorities indicate that this institutionalisation of a new organisation within NATO did not overcome the ambiguities of the Alliance’s posture towards the region, but rather reflected them.