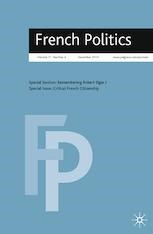 This article assesses the pre-adoption, adoption, implementation and impact of party parity penalties established in 2002 to promote gender equality in the National Assembly.

The analysis argues that while the penalties were implemented and increased over the years and had some success in enhancing women’s numerical representation, from 12.3% of all MPs in 2002 to 38.7% in 2017, rather than being “more than meets the eye,” the parity sanctions were actually far less.

The limited scope and authority of the parity penalties and the gender-biased norms of key gatekeepers and political elites in the political parties and the high courts have circumscribed the extent of the progress in women’s numerical representation and the quality of that representation; women MPs in the National Assembly still remain marginalized in a variety of ways in comparison with their male counterparts.

Thus, the outcome of the party parity sanctions, in GEPP terms, is “gender accommodation” over “transformation.”