The Centre international de formation européenne together with the Institut für europäische Politik organised a conference in the framework of the EUCAIS international conference on the “Prospects of EU – Central Asia Relations” that took place on 28-29 August 2014 in Almaty, Kazakhstan master programme with support of the Volkswagen Foundation and funding by the Jean-Monnet-Programme of the European Union. The conference was an excellent opportunity to exchange ideas and knowledge for representants from academic, political and societal institutions of both regions. Additional to plenary sessions on regional cooperation, natural resources and security challenges within Central Asia as well as on the prospects of both regions’ potential of cooperation, participants presented and intensively discussed papers in four working groups: comparative regionalism, security challenges, democracy promotion and developments in research and teaching in Central Asia.

On 7th and 8th July 2014 the sixth German-Nordic-Baltic-Forum took place in the facilities of the Ministry of Foreign Affairs of the Republic of Latvia in Riga. The conference was entitled “Upgrading the German-Nordic-Baltic Partnership in the EU: Common Values, Mutual Interests and New Challenges” and brought together over 60 experts from science and politics coming from the three Baltic States, Finland, Sweden, Denmark, Norway and Germany. 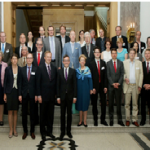 occasion the forum highlighted current topics on the European agenda perspectives for further steps of European cooperation. The discussion focussed on the results of the European Elections 2014, the review of the Europe 2020 Strategy and in light of the current developments in the EU’s direct neighbourhood on the EU’s role as global actor and crisis manager as well as on the perspectives of the Eastern Partnership. The second day of the forum was opened by the Latvian State Secretary Andrejs Pildegoviĉs and Minister of State for Europe at the German Federal Foreign Office Michael Roth. In their key-note speeches they underlined European political priorities and put emphasis on the opportunities for a closer German-Nordic-Baltic partnership.

You can find a report and the conference programme here.

Martin Kotthaus, Head of the European Directorate-General at the Federal Foreign Office, spoke on 3 June 2014 at the Representation of the European Commission in Berlin on the topic “Current Themes in European Policy.” Prof. Dr. Mathias Jopp, director of the Institut für Europäische Politik (IEP), moderated the event.

Martin Kotthaus began by speaking about the Ukraine-Crisis, which continues to dominate both European and German foreign policy. Kotthaus praised the Ukranian presidential elections as being “possibly the best, most fre 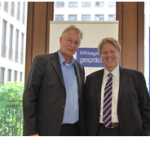 e and democratic elections [in Ukraine] in a long time according to the remarks of the OSCE.” With the establishment of a legitimate government the economic portion of the association agreement, the Deep and Comprehensive Free Trade Area (DCFTA), could soon be signed. Meanwhile the EU will continue to work together with the IMF along with others to remain engaged. Outstanding during the crisis was the unity with which the EU operated. However it is plausible that the topic will remain on the agenda for a while along with what long term effects the crisis will have on the EU’s relationship with Russia.

A further important theme was the European Parliament Election and its result. Kotthaus was happy about the stability in the voter turnout even though there were a few low outliers (only 13% voter turnout in Slovakia). Even so, the importance of the EP Election still needs to be made clearer. The election can’t be seen as a “free shot.” Kotthaus spoke of the need for a revision of the European Voting Act of 1976 in order to standardize and modernize the rules for the election of European representatives.

Closely connected to the EP Election is the question of filling the European leadership positions. President of the European Council Hermann van Rompuy was mandated to consult with the European Parliament and member states to fill the position of the EU-Commission President. More important, however, are the topics that will confront the eventual office holders. Economic topics, such as competition, growth and the creation of jobs must also have a priority next to the development of the Economic and Monetary Union, the topics of climate and energy, rights and freedoms and a coherent and strengthened EU foreign policy and neighborhood policy—also in financial and institutional respects. It is important that the EU focuses on the essential topics—it is not about less Europe but rather a focused and better one.

You can find a report here.