Training series “Capacity Building for the Verkhovna Rada of Ukraine” 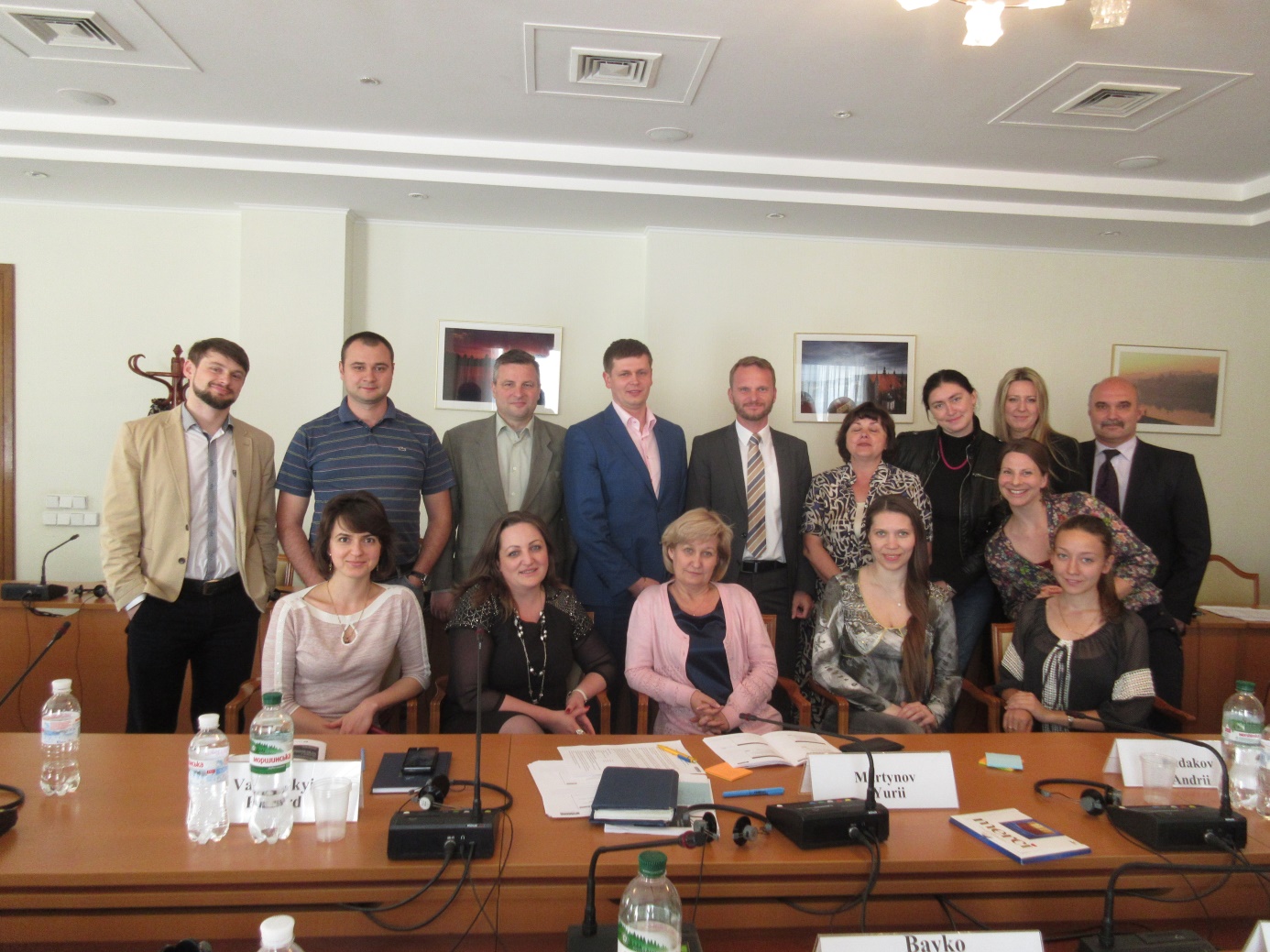 The training series “Capacity Building for the Verkhovna Rada of Ukraine (VRU)” was successfully continued by Constanze Aka, project manager at IEP, in April and May in Kyiv. The workshops are directed at staffers of the European Integration committee as well as other VRU parliamentary committees. The training focusses on the approximation of Ukrainian legislation to the EU acquis and parliamentary best practices in the process of European Integration. In particular, the group actively participated in an in-depth legal coaching in the field of consumer protection.

The main objective of the training series is to strengthen the capacities of the Verkhovna Rada to effectively contribute to the implementation of the Association Agreement. 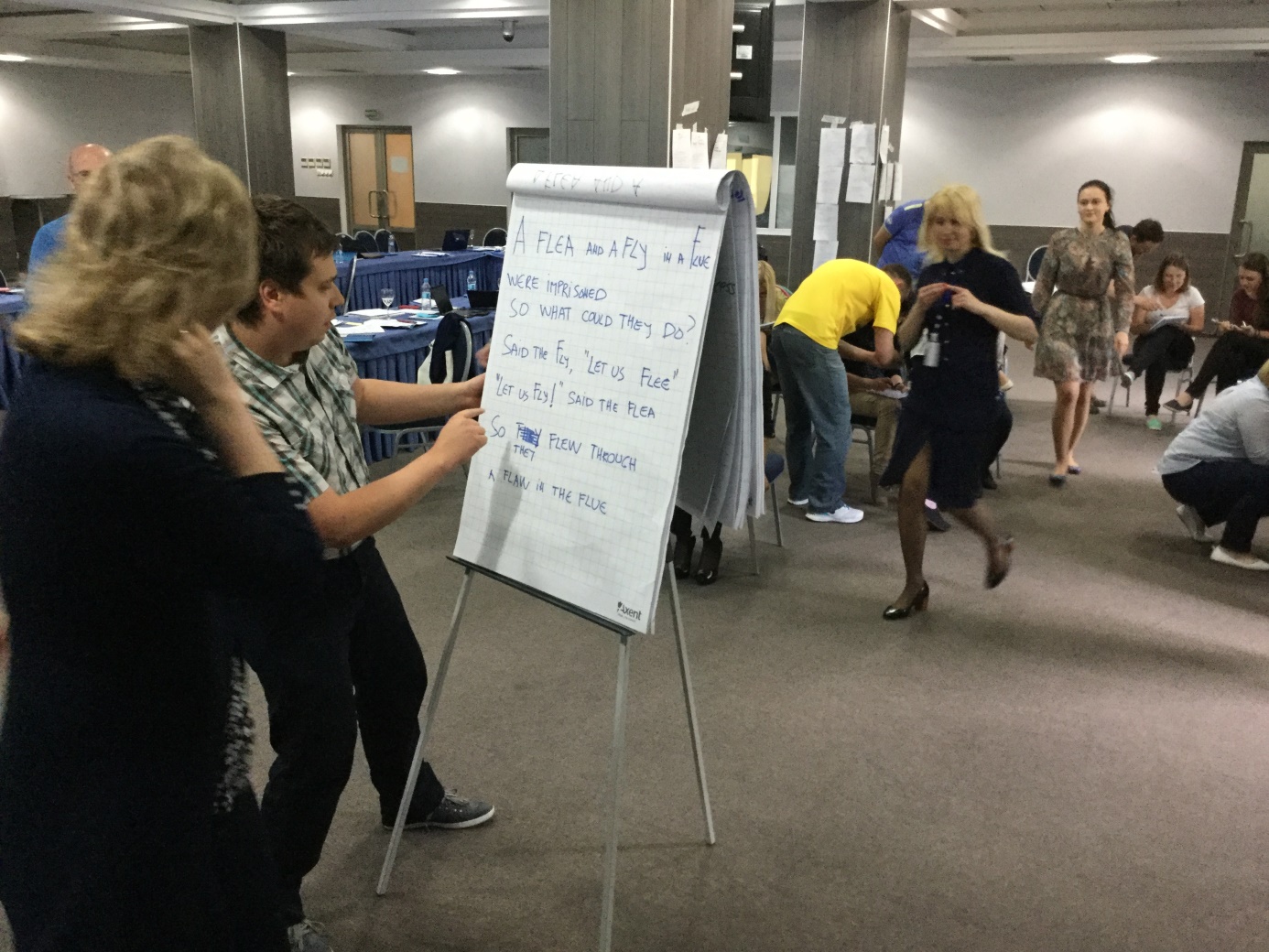 The Institute for European Politics (IEP) continued its work with the Ukrainian civil society in the framework of its Civic School for Sound EU Practice (CiSEP), where the first training series was successfully completed in February this year. The second training series is a “Training The Trainers on EU Project Cycle Management” that is being implemented by Martin Stein, project manager at IEP.

30 representatives of Ukrainian CSOs were selected to take part in this training series to enable them to apply for EU funds available to Ukraine and to plan, organise and implement these projects according to the requirements of the EU. In every workshop the participants also receive sessions on how to successfully prepare and implement trainings to provide them with the tools to pass on their knowledge to fellow members of the Ukrainian civil society.

The first and second workshop already took place in Kyiv in April and May this year, leaving six more until the successful completion of the training series at the end of the year.

For more information on the project, please visit http://cisep.eu/.

The Institut für Europäische Politik operating under the leadership of Europa Union Deutschland (EUD) organized a civil dialogue on „Europas Grenzen – Wir müssen reden!“ on 26 May in Hamburg. The internal and external borders of the European Union were the topic at the core of the debate, as well as questions connected to the European border management and its current development such as: Does the European Project meet its limits? Is the European capacity to act, its solidarity and the future prospect of the European Idea under threat?

At the dialogue „Europas Grenzen – Wir müssen reden!“ citizens were enabled to discus with politicians and experts about the future of Schengen, the freedom to travel, the even more fundamental freedom of movement, and also, how the migration crisis can be coped with on a European level. Will Europe become “Fortress Europe”? Are there viable alternatives? Do we need once again border controls, walls and fences? Or do these developments, in fact, jeopardise European solidarity and in the end maybe even our freedom? What about the achievements of free movement and open borders?

More information on the event series can be found here.

Training Series on “Quality Infrastructure” for the Ukrainian Ministry of Economic Development and Trade
26-28 May 2016, Kyiv 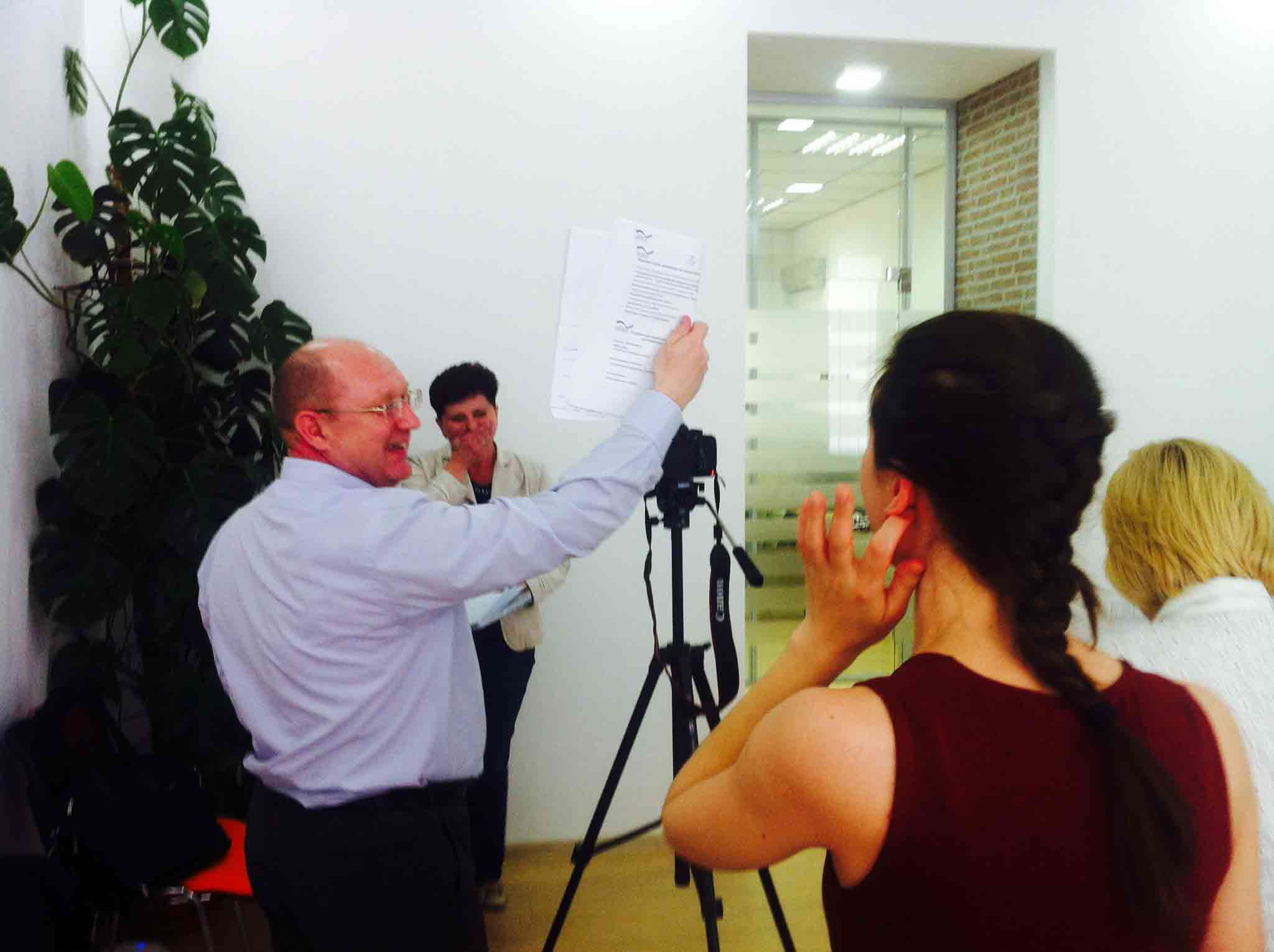 The 5th workshop on “Quality Infrastructure” was conducted in Kyiv by Anne Bercio, Project Leader at IEP from 26 to 28 May.

The training is targeted to foster institutional capacities of MEDT and all linked institutions dealing with technical regulations. This workshop focused on exchanging best practice in standardization and creating a “Mini Blue Guide” for Quality Infrastructure in Ukraine. The overall objective of the project is to strengthen MEDTs capacities for implementing the EU-Ukraine Deep and Comprehensive Free Trade Area/Association Agreement.

We are looking forward to the closing session of the training series which will take place in Kyiv on 24th June. The Manual for good use of Quality Infrastructure in Ukraine ensuring efficient access to the Single Market will be proudly presented to the interested public. The Vice Minister for Economic Development and Trade Mr. Max Nevyodov will assist the event. 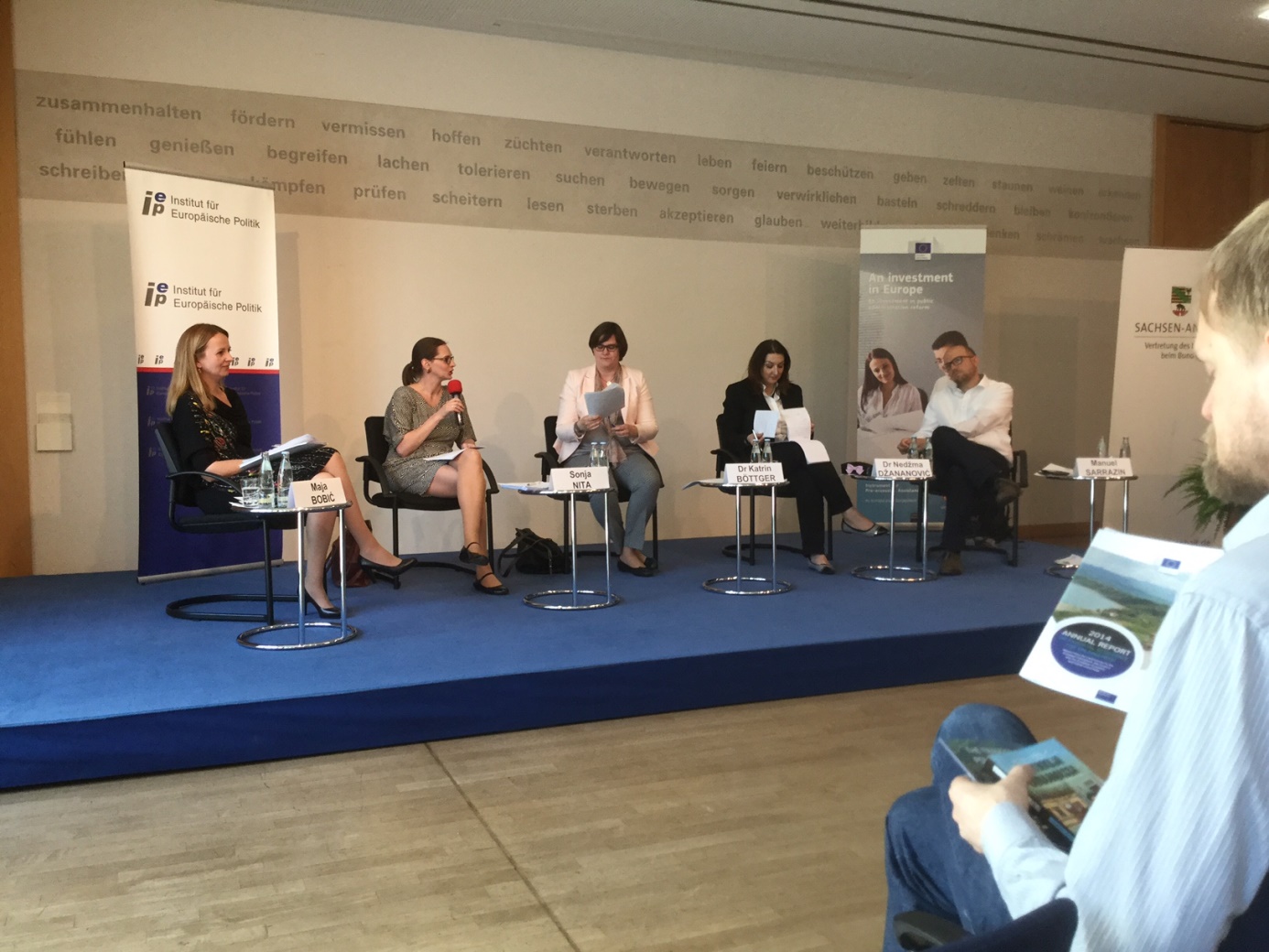 On behalf of the European Commission, Directorate-General for Neighbourhood and Enlargement Negotiations (DG NEAR), the Institut für Europäische Politik (IEP) organised a panel discussion  at the Vertretung des Landes Sachsen-Anhalt beim Bund debating the role of civil society regarding the democratic development in the Western Balkans on 7 June 2016.

The subject was addressed from three different angles: Ms Sonja NITA, Centre of Thematic Expertise on Civil Society Support of DG NEAR, gave an overview of the roles and functions that are taken up by CSOs to contribute to the European integration and democratic development of the region. Moreover, she elaborated on the ongoing engagement of DG NEAR in the Western Balkans. Ms Maja BOBIC, Secretary General of the European Movement in Serbia, and Ms Nedzma DZANANOVIC, Assistant Professor at the Faculty of Political Science of the University of Sarajevo, shared their practical experience as members of the Serbian and Bosnian civil society respectively. Member of the German Parliament Manuel SARRAZIN took the German viewpoint and elaborated on the German support to the Western Balkans’ democratisation in general and to the civil society sector in particular. Throughout the discussion it was highlighted that systemic and focused support to pro-EU CSOs may have an increasing role in shaping the political agendas and the region’s development.

The discussion was moderated by Dr. Katrin BÖTTGER, Deputy Director of Institut für Europäische Politik, Berlin, and TEPSA Board Member.

A detailed report of the event will soon be available here.

IEP Lunch Debate with ambassador Andreas Peschke, Federal Foreign Office: “The EU and the states of the Eastern Partnership – Outlook from a German point of view“
9 June 2016, Representation of the European Commission in Berlin 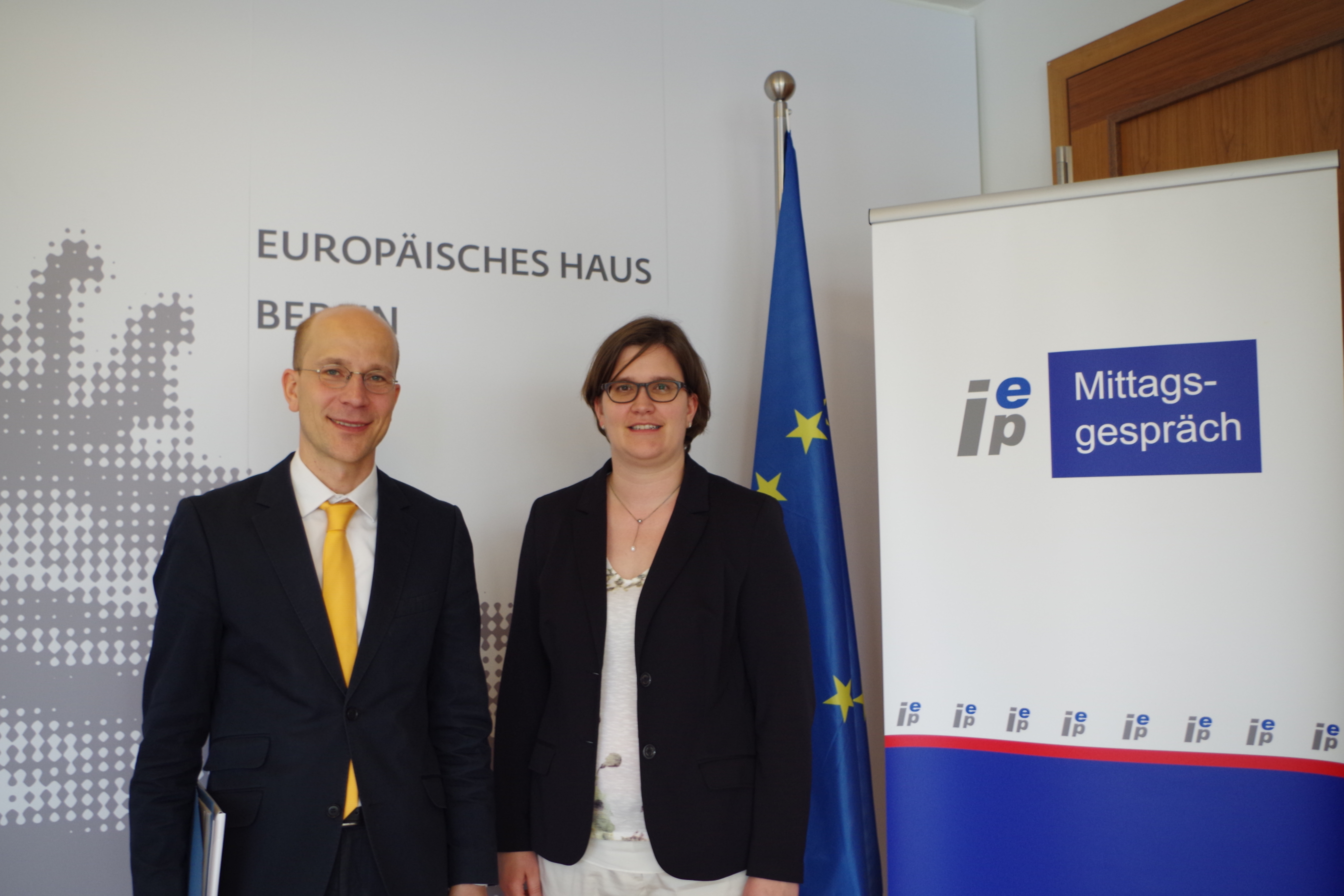 Ambassador Andreas Peschke, Commissioner for Eastern Europe, the Caucasus and Central Asia at the Federal Foreign Office gave a speech on “The EU and the States of the Eastern Partnership  – The German Perspective” at the Representation of the European Commission in Berlin on 9 June 2016. Richard Nikolaus Kühnel, representative of the European Commission in Germany, offered the opening remarks.  Dr. Katrin Böttger, Deputy Director of the Institute for European Politics (IEP) and TEPSA Board Member, moderated the event.