Public lecture by Dr. Daniel Hamilton: “The State of Transatlantic Relations and the Possible Impact of US Presidential Elections”, September 22, from 13:00-14:30 at the Stockholm School of Economics (Strēlnieku street 4A, Riga), Soros Auditorium.

US foreign policy is about to witness a significant change as President Obama’s term expires in the late fall this year. The arrival of a newly elected President will most probably have a considerable impact on US attitude towards Transatlantic cooperation both in economic and security matters, with the latter being particularly important for the Baltic States. Through this lecture, Dr. Hamilton will focus on chances of the candidates and implications of their victories for Transatlantic and European economic and security agenda. Having a particularly rich background in the academic writings with a focus on Transatlantic relations, he will address possible change of the place of the Baltics in particular and the EU in general on the US security agenda too.

The video of the event is available on our YouTube channel

Public discussion: “From Wales to Warsaw: NATO – Back to the Origins?”, June 16, Riga, Latvia.

The aim was to assess the progress reached since the NATO summit in Wales and expectations from the upcoming Warsaw summit.

Public discussion: Eastern Neighbourhood: Where To? and presentation of the newest publication: “Dilemmas of Europeanisation: Political Choices and Economic Transformations in the Eastern Partnership Countries”, August  25, Riga, Latvia.

Read online about it here.

Public discussion based on the latest findings of the “Nations in Transit 2016” survey – “Democracy in the Baltic States: Achievements and Unused Opportunities”, September 8, 2016, Riga, Latvia 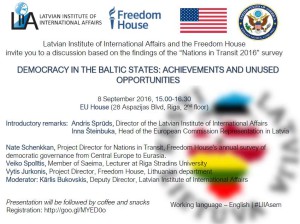 The year 2015 was characterized by contradictory trends in Latvia. While democracy further consolidated in the country, illiberal strands appeared in the domestic political discourse, and an ideological struggle over so-called traditional values became more visible. Also two major foreign policy developments had an outsized influence on domestic politics in 2015: the Latvian presidency of the Council of the European Union in the first half of the year and the European migrant and refugee crisis in the second half. How all these issues affected Latvia’s and Baltics averaged scores as a whole. No doubt that nowadays the Baltic States have become as eastern border of Western democracy, but how the society sees the situation?

What is the future of Russia-West relations in the light of the Warsaw Summit and other recent developments? Can we speak about any forms of dialogue, or we can only build walls in the foreseeable future? What is needed to manage confrontation and to rebuild trust? These are just some of the questions that directly concern the broader Euro-Atlantic community including Latvia.

Read online about the event in here.

Regional discussion with members of all factions of the Saeima (Parliament of the Republic of Latvia): “Security policies Latvia”. September 16, Liepaja city, Latvia. 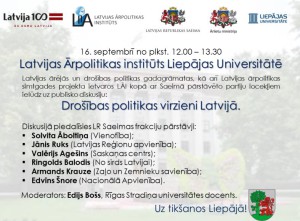