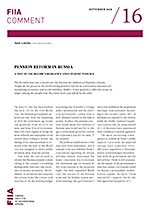 On June 14, the day that marked the kick-off for the FIFA World Cup, the Russian government announced that from the beginning of 2019 the retirement age would rise gradually from 60 to 65 for men, and from 55 to 63 for women. Since the Putin regime is facing the most difficult and unpopular social reform since coming to power, the timing of the announcement to coincide with the start of the World Cup was designed to divert public attention away from the reform.

Few deny the overall need to reform the Russian pension system owing to the countryʼs troubling demographic forecasts and uncertain economic prospects. Nevertheless, to all intents and purposes the reform looks like a knee-jerk reaction to fix the leaking budget sustaining the Kremlinʼs foreign policy adventurism and the eliteʼs corrupt benefits, rather than a well-planned reform for the sake of society. In effect, the pension overhaul would mean that millions of Russian men would not live to the age of retirement given the current life expectancy rate (67 for men, 77 for women) (…).