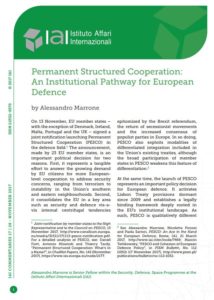 On 13 November, EU member states – with the exception of Denmark, Ireland, Malta, Portugal and the UK – signed a joint notification launching Permanent Structured Cooperation (PESCO) in the defence field. The announcement, made by 23 EU member states, is an important political decision for two reasons. First, it represents a tangible effort to answer the growing demand by EU citizens for more European-level cooperation to address security concerns, ranging from terrorism to instability in the Union’s southern and eastern neighbourhoods. Second, it consolidates the EU in a key area such as security and defence vis-a-vis internal centrifugal tendencies epitomized by the Brexit referendum, the return of secessionist movements and the increased consensus of populist parties in Europe. In so doing, PESCO also exploits modalities of differentiated integration included in the Union’s existing treaties, although the broad participation of member states in PESCO weakens this feature of differentiation.