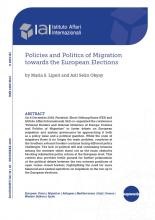 On 6 December 2018, Friedrich-Ebert-Stiftung Rome (FES) and Istituto Affari Internazionali (IAI) co-organized the conference “External Borders and Internal Divisions of Europe: Policies and Politics of Migration” to foster debate on European migration and asylum governance by approaching it both as a policy issue and a political question. While the scale of migratory flows is no longer the main problem, countries at the Southern external borders continue facing different policy challenges. The lack of political will and continuing tensions among the member states stand out as the main obstacles blocking substantial policy reform at the European level. This context also provides fertile ground for further polarization of the political debate between the two extreme positions of open versus closed borders, highlighting the need for more balanced and neutral narratives on migration in the run up to the European elections. Report of the conference “External Borders and Internal Division of Europe: Policies and Politics of Migration”, organized in Rome on 6 December 2018 by Friedrich-Ebert-Stiftung (FES) Rome and Istituto Affari Internazionali (IAI).