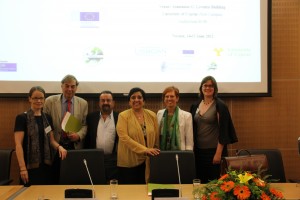 The Cypriot Pre-Presidency Conference took place on 14 and 15 June 2012 at the New Campus of the University of Cyprus in Nicosia. It was organised by KIMEDE (Cyprus Institute of Mediterranean European and International Studies, in cooperation with the Erasmus Academic Network LISBOAN, the Trans European Policy Studies Association (TEPSA), the Cypriot Presidency of the Council of the EU, the European Commission Representation in Cyprus and the University of Cyprus. This conference welcomed a broad audience of local politicians, representatives of the EU institutions and of local organisations but also researchers from EU member states and beyond.

The conference was opened with the TEPSA recommendations to the Cypriot presidency and followed by the presentation of the Priorities to the Cypriot EU Presidency. During the plenary session, TEPSA members took part in a lively discussion on the theme of solidarity: Which kind of solidarity? An analysis of the sharpened debate on the EU in the member states. The workshops have discussed about “The economic and social crisis in the EU”, “Free movement and migration”, “the EU Enlargement Policy” and “the EU’s external relations and diplomacy”. The participants have also tackled the sharpened debate of the solidarity at the European and national level. The Pre-Presidency Conference closed with a Plenary Session on “the reflections on Lisbon innovations and the role of the EU Council”.

Please download the Recommendations to the Cypriot Presidency, Discussion paper on solidarity in the European Union the final programme and the Report of the TEPSA Pre-Presidency Conference in Cyprus.