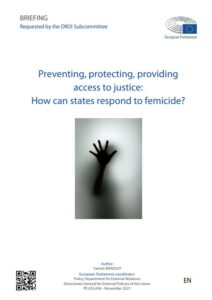 TEPSA has coordinated a study requested by DROI Subcommittee of the European Parliament. The study was authored by Tasmin Bradley, a Professor at the University of Portsmouth, United Kingdom. The study is entitled “Preventing, Protecting, Providing Access to Justice: How can states respond to femicide?”.

Growing awareness of femicide has not universally translated into effective policy and programming. Though legislation relating to gender-based violence and/or femicide exists in many countries, both persist. A combined social, cultural, political and economic approach situates femicide prevention and responses at various levels, including changes in individual behaviour. Using the term ‘femicide’ more frequently at international forums is crucial not only to focus attention on the gendered nature of violence but also to act as a call for action. Situational studies reveal that political will to end femicide differs from country to country. Femicide together with the patriarchal norms and misogyny that precipitate it are not just extra-EU problems. Rather, they are of global concern, demanding a global response; in non-EU countries this response is often dependent on donor funding. We now know more than ever what works to reverse patterns of violence. These patterns can be broken by developing the capacity of women’s organisations and strengthening global feminist movements that work with national and local activist networks. Additionally, engaging men and boys in this process of transformation is vital if we are to address violence against women and girls and ultimately end femicide.