Differentiation: Clustering Excellence (DiCE) is a Horizon 2020-funded project, which started in January 2020 and will run for three years. Its main objective is to ensure that state-of-the-art research on differentiation is translated into policy advice and made accessible to policy-makers at European, national and regional levels. The ultimate goal is to better prepare the EU for various scenarios of differentiation;  ‘differentiation’ describes the process where some member states decide to move ahead together on some policy areas, while others do not.

DiCE, as a Coordination and Support Action, aims to create a unique cluster of excellence by bringing together, through their coordinators, the three successful H2020 projects on differentiation: EU Differentiation, Dominance and Democracy (EU3D), Integrating Diversity in the European Union (InDivEU), and EU Integration and Differentiation for Effectiveness and Accountability (EU IDEA). These projects collectively constitute an unparalleled critical mass of scholars on differentiation.

DiCE is coordinated by the Robert Schuman Centre at the European University Institute in a consortium of five prestigious academic institutions and organisations and will pool the research and experience on differentiation of 38 partner institutions from across Europe, involving more than 50 leading scholars and including universities, think tanks and media. 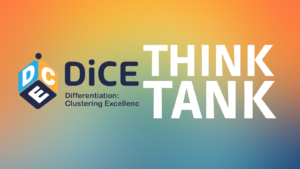 Differentiation in Europe is an ongoing phenomenon, with multiple intersecting factors and policy areas that create an increasingly complex vision of the European project. As such, the DiCE project seeks to facilitate a continuous reflection on differentiation and the further development of relevant approaches and theories, also allowing for the evaluation of policies and the provision of further policy advice. We present here a blueprint on possible designs for an ongoing think tank on differentiation to not only help bring the debate on differentiation closer to the general public but also ensure that our project’s findings remain openly accessible for future generations.

To be up-to-date with the project activities:

This project has received funding from the European Union’s Horizon 2020 research and innovation programme under grant agreement No. 870789.