Claire Darmé, Pros and Cons of Proactive Political Leadership: A Review of the Legacy of the “Last Chance” Commission, IAI Papers, 19:18, IAI, October 2019. 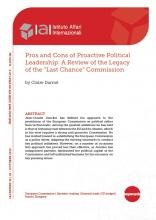 Jean-Claude Juncker has defined his approach to the presidency of the European Commission as political rather than technocratic. Among the greatest ambitions he has held is that of restoring trust between the EU and its citizens, which in his view requires a strong and proactive Commission. He has worked toward re-establishing the European Commission as a policy driver, adapting the existing structures to conduct key political initiatives. However, on a number of occasions this approach has proved less than effective, as Juncker has antagonised partners, diminished the political capital of the Commission and left unfinished business for his successor on key pressing issues.