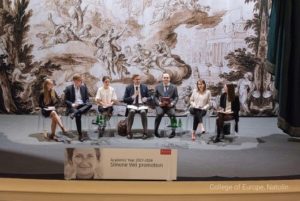 On Monday 23 October 2017, the Natolin campus of the College of Europe organized a public debate in the Royal Łazienki Park in Warsaw entitled: “A Wider Europe? Debate on Identities and Values between the EU and its Neighbours”, featuring students representing countries of the European Union and the European Neighbourhood. Link