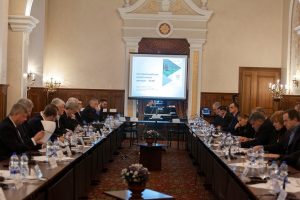 On 31 January 2019 the Razumkov Centre has held a public discussion “Why evidence-based research is important? The role of think tanks in modern-day Ukraine”. The event brought together the representatives of leading research institutions, Western foundations and other members of expert community. The experts discussed the role of think tanks in Ukraine, their key audiences and peculiarities.

According to the 2018 Global Go to Think Tank Index Report, the Razumkov Centre was recognized as one of the best analytical institutions in the world and is ranked at the 45th place, thus becoming the second-best think tank Central and Eastern Europe.

The Razumkov Centre was also included in the nomination the “Best Managed Think Tank”.

It is worth noting that the Razumkov Centre remains the only analytical institution in Ukraine that has been consistently included in the nomination “Top Think Tanks in the World”.

The author of the project, James G. McGann, publishes annual, detailed and thorough studies since 2006. This year marked the sixth time when parallel presentations of the project results were made in dozens of countries around the planet.